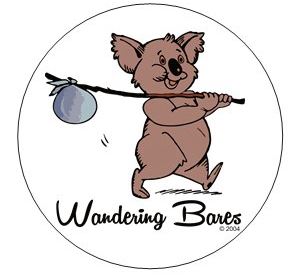 The Wandering Bares Story
by John Clarke
I was slowly forming an idea of what I thought a logo should look like, so I then approached a local graphic artist. Together we pored through dozens of pictures in art books she had, until I spied the little bear. Not a koala, not a grizzly, just a cheeky looking fellow that fitted my hazy idea of the sticker. I then had her pencil in the swag bag on the end of a staff, Blinky Bill style, and wow, there is a wandering bear. I had her email the design on to our local sign printer. The rest, as they say, is history. From the first printed batch, as extra to the fee, one went to the graphic artist. I didn’t' t even know she and her husband were nudists. The stickers were working already.
As soon as I showed the finished sticker to our nudist friends, they were an immediate hit. I then advertised them in a national nudist magazine, and the orders commenced flowing in.
Unfortunately, the price of the magazine ads escalated over time, and I had to make the decision to either increase the price of the stickers to cover these costs, or simply rely on word of mouth from nudists already with them. To avoid raising the price, thus defeating their purpose of being cheap enough for all nudists, I chose the latter. It's worked out quite well.
The humble sticker has now morphed into a line of T shirts and also have enlarged the little bear to fit the spare wheel cover of our motorhome. Another nudist friend has the same on his dual spare tyre covers on his caravan. It really looks great. Another happy nudist has made the sticker as the centre of a "sun" emblem, painted on his caravan. A fitting picture of our way of life.
The "Wandering Bares" sticker is particularly popular with a lot of single male nudists. It gives recognition of the way of their life to other nudists, but at the same time it is not an "in your face" symbol. It is easily explained away to those textiles who may regard a lone man as simply a "dirty perverted old man" ifhe showed a naked figure sticker to proclaim his life style. It could easily be said to be a " Wanderer" group who misspelled the bear.
One amusing description I received was from an American couple who ordered some stickers to take back to California with them, was for the little 'Hobo Bear". I had never thought of it that way before.
For any nudists who wish to purchase a sticker or other nudist Wandering Bares goodies please visit http://www.nuddyshop.com
After reading Frank Maundrell's story of nudist symbols and decals, I thought that perhaps I should I should tell the story of how the most accepted logo in the nudist movement came into being.  Approximately 3000 of these vehicle window stickers are now moving their way all around Australia, as well as several that have been sent to the U.S.A., and also the U.K.
This happy looking little bear is now the recognition symbol of travelling nudists from Hobart to Darwin and all the nude tourist destinations between.
This story commenced back in 2002 when Joan (my wife) and I decided to make our first trip to Darwin, in our little Nissan Urvan poptop. We had travelled a lot of the country, mainly the
coastal and southern areas, checking out the nudist places as we traversed the country, but my one outstanding desire was to drive to Darwin. I had started for there way back in the 60's but circumstances forced me to change the itinerary, and so had cut short the trip.
We set out in early June, and it so happened that the annual convention of the Campervan and Motor home Club of Australia had been held at Barcaldine, (Qld) the previous week, and so each afternoon as we looked for a good spot to camp the night, (we seldom used caravan parks), we usually were accompanied by several of the C.M.C.A. travelers. It made for a jovial group for the usual "happy hour" gathering in the late afternoon aamp. It was from these gatherings that we were able to glean the information on what to see and where were the good camp spots on the road ahead.
Quite often I would study some of the other travelers and say to Joarl "Look at the suntan on that couple. I bet they're nudists". It was not the done thing however to simply front up and say ask so I believe  we missed making friends and new nudist acquaintances among fellow travelers. One thing I had noticed though, was a lot ofthe C.M.C.A. motorhomes sported various stickers on their vehicle windows. Mostly these proclaimed to the world that they belonged to a particular chapter group within their club. It started me thinking "why don't we nudists have an identification sticker to allow us to be recognized by other fellow nudists?
3 months later, on our return to Teatree Park, I began to get serious about it. I commenced to draw various designs, running them past friends and visitors for their comment. Very few received favorable mention. I also wrote to the C.M.C.A., of which I had joined, regarding forming a group for nudists. Their reply to that was met with stony silence. On pushing further enquiries, I was informed their members do not go in for that kind of thing. If only they knew.
Back to content